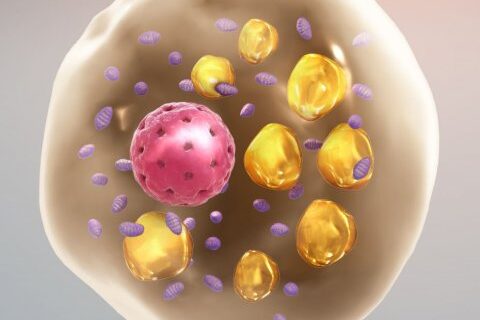 An immune signal promotes the production of energy-burning “beige fat,” according to a new study published on august 5th, in the open-access journal PLOS Biology by Sun Yat-Sen University (Guangzhou, China), Zhonghan Yang and colleagues. The finding may lead to new ways to reduce obesity and treat metabolic disorders.

The beige color of this type of fat comes from its high concentration of mitochondria, the powerhouses of the cell. Mitochondria burn high-energy molecules like fat and sugar through oxygen, releasing energy as a result. Usually, that energy is stored as ATP, the energy currency that the cell uses for almost all its activities. But in beige fat, the mitochondria build up a protein called “uncoupling protein-1” that limits ATP production and generates heat. Babies are born with “brown fat,” a similar tissue concentrated in the shoulder region, which helps them stay warm, but brown fat gradually diminishes as we age. Not as beige fat, which is more widely distributed and can be created throughout a person’s life as a response to both cold and neuronal or hormonal stimulation.

Recent work, including that of the authors of the new study, has revealed that cytokines – signaling molecules of the immune system – play a role in the regulation of beige fat. To further explore that regulation, the authors manipulated the levels of the cytokine interleukin-25 and showed that an increase in the cytokine could mimic the effects of both cold stimulation and a hormone receptor stimulation to increase beige fat production in mice. They traced the signaling chain further, showing that IL-25 exerted its effects through two other cytokines, which in turn regulated immune cells called macrophages. Those cells acted on neurons that reach beige fat tissue, promoting an increase in the production of the neurotransmitter norepinephrine, which was already known to promote beige fat production.

Thus, the authors’ work revealed the sequence of regulatory signals that begins with IL-25 and ends with the release of norepinephrine and beige fat increase.

Finally, the authors showed that administering IL-25 to mice eating a high-fat diet prevented them from becoming obese and improved their ability to maintain their insulin responsiveness, which is impaired in chronic obesity. “Our results show that interleukin-25 plays a key role in the production of beige fat,” Yang said, “and point toward increased interleukin-25 signaling as a potential treatment for obesity.”

Burning 200 calories a day has a huge effect on your heart, science says
September 27, 2021