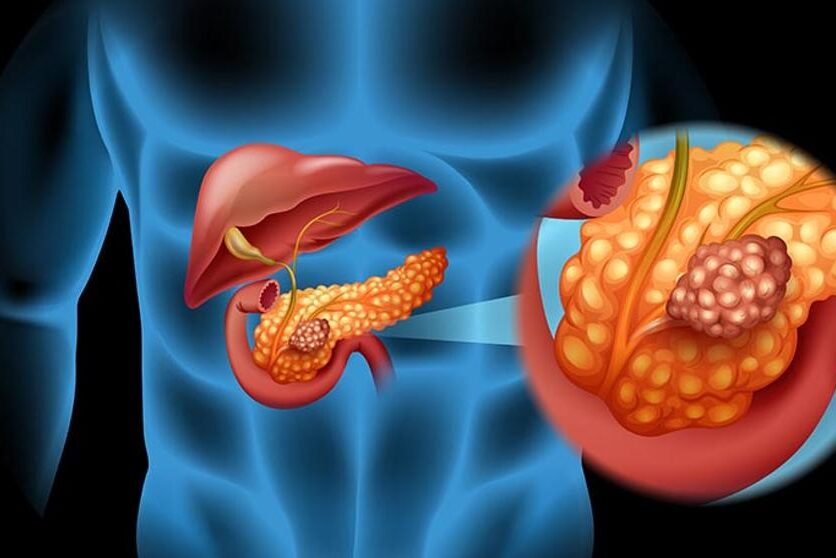 Pancreatic ductal adenocarcinoma is a highly lethal form of cancer with rising occurrence, and strategies to prevent and treat the disease are urgently needed. Most cases of pancreatic cancer arise from pre-cancerous lesions called pancreatic intraepithelial neoplasia; about 55-80% of adults over 40 are estimated to have these low grade pre-cancerous silent pancreatic lesions.

PPARδ regulates the expression of a wide spectrum of key genes that influences biological processes like lipid metabolism and cancer formation. Activation of PPARδ dramatically accelerates the progression of pre-cancerous lesions into pancreatic cancer. Shureiqi previously worked at MD Anderson Cancer Center at the University of Texas where he conducted much of this study, specifically in partnership with Xiangsheng Zuo, M.D., Ph.D., before moving his research to the cancer center in 2020.

“We became interested in studying the effects of PPARδ on pancreatic carcinogenesis because our prior observations showed that PPARδ strongly promoted other gastrointestinal cancers. But there’s very limited information about PPARδ’s role in pancreatic cancer’s development,” said Shureiqi.

Activation of PPARδ correlates with excessive exposure to certain ligands, both natural and synthetic. Some ligands naturally occur in high fat diets, which have been associated with increased risk for pancreatic cancer in humans and animal models. High fat diets are enriched with fatty acids that are natural ligands of PPARδ.

Other synthetic forms of PPARδ ligands, like Cardarine (GW501516), are found in exercise supplements, aimed to boost physical performance and endurance. GW501516 was originally designed by pharmaceutical companies to encourage the body to use more fat and treat noncancerous conditions like obesity and hyperlipemia. Pharmaceutical development of GW501516 and other similar potent PPARδ agonists for medical use has long been discontinued given their potential procancerous side effects. Though studies on how PPARδ affects colorectal cancer date back to 1999, and pharmaceutical companies have halted synthetic PPARδ ligand development, unregulated internet outlets still sell substances like Cardarine. Ads are largely marketed to young people, claiming it will help them build muscle endurance and burn fat.

Shureiqi explains that, initially, researchers found that these synthetic ligands reduced fatigue in mice. This news made its way to major media outlets, who nicknamed it “exercise in a pill.” “Unfortunately, what the media didn’t address was the dark side of PPARδ. Like muscle cells, synthetic PPARδ ligands also help cancer cells get more energy from fats as a fuel source,” he said.

“It’s shocking to me,” Shureiqi continued. “Animal models repeatedly show the strong relationship between PPARδ and cancer promotion in the case of colorectal cancer and stomach cancer. Now we’re gaining more information about how it affects pancreatic cancer.”

Critical factors that promote the progression of silent pancreatic precancerous lesions to pancreatic cancer remain poorly defined, especially those that are easy to target. While most of these pre-cancerous lesions don’t develop into cancer, understanding how they progress is still crucial to finding interventions to address the rising rate of pancreatic cancer. Findings from this study indicate that people who have silent precancerous lesions, even those that are low grade, could increase their risk of developing pancreatic cancer by consuming PPARδ natural activators, like in high fat diets, or synthetic ones, like Cardarine. Future development of effective agents to block PPARδ activation could be a new approach to prevent the progression of precancerous lesions into pancreatic cancer. Limiting exposure to high fat diets could also be considered for those with a high prevalence of pre-cancerous pancreatic lesions. But for now, the prevalent sales and use of those athletic boosting synthetic PPARδ activating substances causes the most pressing concern.

“This new information should alert individuals to the potential serious health risks from using synthetic PPARδ agonists,” Shureiqi said. “We’re trying to spread the message that’s using those substances is not a good idea. It might enhance muscle endurance, but it also enhances cancer’s ability to use energy and grow.”