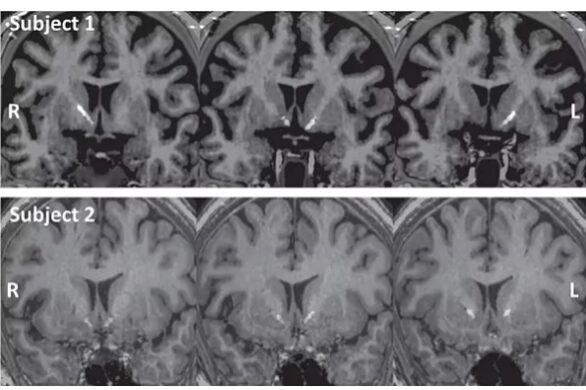 LOC eating, or the subjective sense that one cannot stop eating, is associated with binge eating—defined by the consumption of an objectively large amount of food in a short period of time accompanied by a sense of LOC1. LOC eating is often characterized by the loss of inhibitory control in response to appetitive cues and cravings leading to binge eating2. Recurrent and distressing episodes of binge eating are the key features of BED. BED is the most common eating disorder, affecting up to 3% of US adults, and is the most severe disorder associated with LOC eating based on volume of food consumed1. It is associated with obesity, decreased quality of life and premature mortality3.

Most treatments for obesity fail to address LOC eating directly, limiting the efficacy of even the most aggressive interventions such as bariatric surgery4,5. Clinical evidence supports a role of cravings for preferred food, or intense desires to consume specific palatable foods, before the onset of LOC and binge eating6,7. Particularly in individuals who are overweight or obese, food cravings have been linked with LOC among those diagnosed with BED8. Given this, recent studies have examined neural signals associated with food craving in the pursuit of identifying a biomarker used to trigger DBS (that is, responsive DBS (rDBS)) and inhibit onset of LOC eating when patients may be most at risk.

In the effort to identify such a craving biomarker, previous work in mice found that anticipation of a high-fat food reward was associated with increased low-frequency oscillatory power in the NAc9. This work supported a growing body of evidence across species reporting electrophysiological, neurochemical and functional neuroimaging activities within circuits involving the NAc that correlate with reward anticipation10,11,12,13 and predict consequential behavioral outcomes14. Using low-frequency, delta-bandpower as a biomarker to trigger delivery of a brief train of high-frequency electrical stimulation to the NAc (hereafter referred to as rDBS) resulted in substantial and lasting attenuation of binge-like eating in mice sensitized to high-fat food9, whereas conventional, continuous DBS appeared to lose efficacy over time15,16.

In the present study, we report the proof of concept in this human study designed to characterize human NAc electrophysiology of craving as it relates to LOC eating. We sought to identify changes in NAc electrophysiology associated with moments of food craving and LOC eating during controlled in-clinic behavioral tasks and to assess the generalization of this effect to LOC eating events in a naturalistic setting and outside the behavioral laboratory. Finally, we implemented rDBS triggered by NAc electrophysiology identified in behavioral and naturalistic assessments, and report here the initial results on the potential efficacy of this new intervention. The present study was performed under a US Food and Drug Administration (FDA) Investigational Device Exemption (G180079) using the NeuroPace Responsive Neurostimulation (RNS) System17.

All code has been made publicly available and can be found at https://github.com/rajatss123/LOC_NM_Code.

Should you try intermittent fasting for weight loss?
September 26, 2022

The risk of incident extrahepatic cancers is higher in non-alcoholic fatty liver disease than obesity
September 5, 2022